Early Christian monasticism drew its inspiration from the examples of the Prophet Elijah and John the Baptist, who both lived alone in the desert, and above all from the story of Jesus’ time in solitary struggle with Satan in the desert, before his public

ministry. Beginning with the Exodus and all through the Old Testament times, the desert was regarded as a place of spiritual renewal and a return to God. St. Anthony the Great (ca. 251-356) was the first 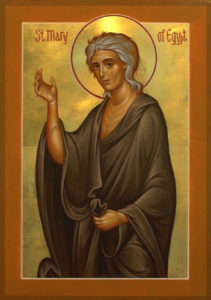 well-known Christian to withdraw to the desert.

While the earliest Desert Fathers and Mothers lived as hermits, they were rarely completely isolated, but often lived in proximity to one another, and soon loose-knit communities began to form in such places as the Desert of Nitria and the Desert of Skete. The progression from hermit (“anchorite”) to monk (“cenobite”) living in community under one abbot, came quickly, when in 346 St. Pachomius established in Egypt the first cenobitic Christian monastery.

The Eastern monastic teachings were brought to the western church by St. John Cassian (ca. 360 – ca. 435).  As a young adult, he and his friend Germanus entered a monastery in Palestine but then journeyed to Egypt to visit the eremitic groups in Nitria. Many years later, Cassian founded a monastery of monks and probably also one of nuns near Marseilles. He wrote two long works, the Institutes and Conferences. In these books, he not only transmitted his Egyptian experience (they are perhaps the oldest written record of 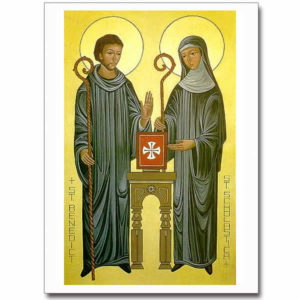 the thought of the Desert Fathers), but he also gave Christian monasticism a profound evangelical and theological basis. In the 6th century, St. Benedict. crystallized this gospel way of life in his Rule for Monasteries.

The founders of Citeaux centered their ideals on the desire for authentic monastic simplicity and evangelical poverty. They believed that their inspiration for this renewal could be found in a more literal interpretation of St. Benedict’s Rule. On 21 March 1098, St. Robert, the abbot of the Benedictine abbey of Molesme (France) set out with 21 of his monks to the wilderness of Citeaux to begin the new reformed monastery. In 1100, after Robert returned to Molesme, St. Alberic led the community as abbot.

St. Stephen Harding, an Englishman who succeeded Alberic as abbot, was the principal architect of the Carta Caritatis, a Constitution which bound all the monasteries of the Order to a common observance of 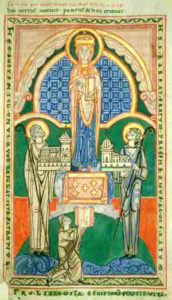 rules and customs. This Constitution provided for a system of visitation by an overseeing abbot who would ensure the fidelity of each monastery to the spirit and principles of Citeaux, at the same time respecting the autonomy of each house. This was the beginning of the first Order in the history of the Church.

It was St. Stephen Harding who in 1112 received Bernard of Fontaines-les-Dijon and thirty of his relatives as monks of Citeaux. In 1115 the exceptionally charismatic and talented young Bernard was sent to begin a new Cistercian foundation, Clairvaux, in Burgundy (France). Hereafter he would be known throughout the Christian world as Bernard of Clairvaux. Spearheaded by St. Bernard the Cistercian movement began to spread quickly throughout Europe to include over 500 monasteries by the end of the 13th century. 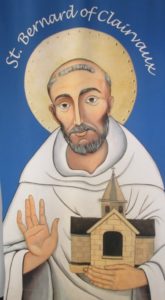 St Bernard was one of the most commanding leaders of the first half of the 12th century as well as one of the greatest spiritual masters of all times. During his 38 years as abbot Bernard personally saw to the establishment of 65 Cistercian monasteries. In spite of intense activity, he found time to write extensively on spirituality and theological issues. His spiritual masterpiece is his Sermons on the Song of Songs.

The first Cistercian monastery for women was established at Tart in the diocese of Langres (now Dijon) in 1125, by nuns from the abbey of Jully, a dependence of Molesme, where St. Humbeline, sister of St. Bernard, lived and died. St Stephen Harding established Tart as Citeaux’s own daughter house and entrusted it to the pastoral care of the abbot of Citeaux. From then on individual monasteries of women as well as whole federations of nuns sought to ally themselves with the Cistercian monks first in France and then in Spain, where the royal monastery of Las Huelgas was founded in 1180.

From the very beginning Cistercian spirituality proved its fruitfulness in the witness of the saints and spiritual masters that emerged in our monasteries. The four “Evangelists” (spiritual theologians) of Citeaux are considered to be: Bernard of Clairvaux, William of St. Thierry (†1148), Aelred of Rievaulx (†1167), and Guerric of Igny (†1157). Their affective spirituality emphasizing the sacred humanity of Christ was also marked by a distinctive Marian

orientation. These themes were further developed in the thirteenth century by the nuns of the Cistercian monastery of Helfta, which was known as “the crown of German convents.” Outstanding among these women were

In the 18th century, a reform at the Abbey of La Trappe in France resulted in the popular name of Trappist or Trappistine for the members of our Order, which has now spread throughout the world – at present, there are about 180 monasteries, on every continent and in almost every country.  St. Gertrude the Great, St. Mechtild of Magdeburg and St Mechtild of Hackeborn.

In 1987 the Monastery of Our Lady of the Angels was founded in Crozet, Virginia, near Charlottesville, in the foothills of the Blue Ridge Mountains. In this setting, the School of Love continues to flourish. Here modern women learn to follow Jesus in self-gift for the glory of God and the salvation of the world he loves so much.